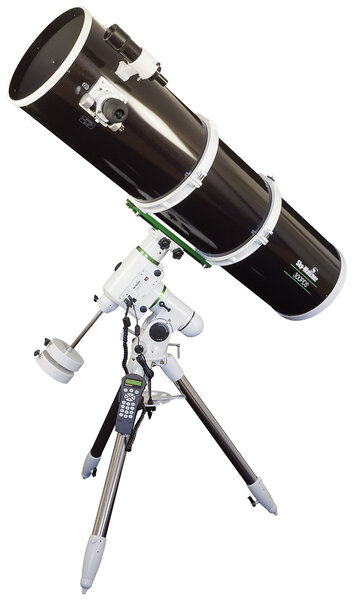 This telescope provides a huge aperture for detailed DSO observing. It is one of the largest Newtonian telescopes produced by Skywatcher and collects about 40% more light than a 254mm telescope. This means that not only bright high-contrast planetary observing is possible, but that the telescope has its forte above all in observing DSOs. Whereas most small telescopes are only capable of showing the cores of some galaxies, this telescope can clearly show the spiral structure. Globular clusters can also be observed as fascinating objects in this giant, and some can be resolved into countless individual stars over the entire field of view.

The telescope has a diffraction limited, parabolic primary mirror which is centre-marked for assisting precise adjustment of the optics. The thin spider vanes and small secondary mirror mean excellent contrast. The high resolution available can reveal an extremely high level of planetary detail with sufficiently good seeing. Although the telescope is one of the largest that can be placed on an equatorial mount, this telescope is still easily transportable. For the exact weight, please refer to the technical data. The solid 2-inch Crayford focuser provides enough support for even very heavy eyepieces and cameras. The fine focusing makes it easy to find the optimum point of focus. The f4.9 aperture ratio makes it virtually predestined for astrophotography, allowing this extremely powerful telescope to be used for short exposure times with a generously wide field of view. The use of an optional coma corrector will provide photos that are sharp right up to the edge of image.

The PDS version of the Explorer comes with a dual speed focuser. This has a 1:10 reduction ratio for sensitive focusing which is most important for astrophotography, but is also very useful for visual observing. The tube length has been slightly shortened compared to the Explorer P version and the secondary mirror has consequently been enlarged in order to further optimize the system for astrophotography.

This is the largest and most capable mount made by Sky-Watcher. It has been specially developed to be able to support heavy telescope OTAs of up to 18Kg, stably and vibration-free. This is the optimal requirement for successful astrophotography, which depends on very precise movement of the mount when tracking. It comes in a white design, and already has GoTo control built-in. Virtually no other mount offers better value for money than the EQ-6, making it highly popular among amateur astronomers. Even at the high GoTo speed, the powerful stepper motors on the right ascension and declination axes slew the telescope very quietly, so that your neighbours' sleep will not be disturbed in any way. Quick and effortless alignment with the North Pole for astrophotography is by means of a backlit polar finder.

This model is equipped with the latest SynScan GoTo hand controller. The hand controller has a huge database of celestial objects and performs GoTo functions without a computer attached. The 42900 objects include all Messier, NGC, IC objects and many other deepsky catalogues plus double and variable stars.

The mount provides a number of other useful functions, for example the "guided tour" helps to find and observe all interesting objects currently visible. The hand controller also helps to perform the polar alignment, can be used to check power voltage and temperature as well.

When doing astrophotography, the backlash compensation and the adjustable autoguiding speed helps a lot, and also the PEC functionality.

The hand controller firmware can be upgraded from the Internet. Powered by 12V DC. 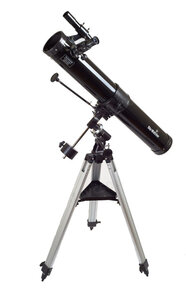 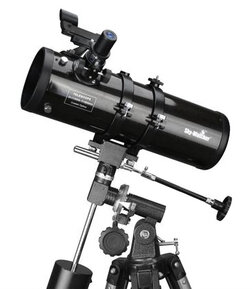 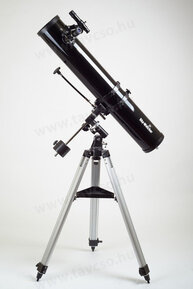